In the Hands of a Few 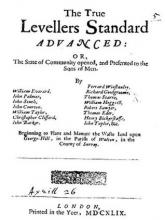 In the beginning of time the great creator, Reason, made the earth to be a common treasury, to preserve beasts, birds, fishes and man, the lord that was to govern this creation … Not one word was spoken in the beginning that one branch of mankind should rule over another … But … selfish imaginations … did set up one man to teach and rule over another. And thereby … man was brought into bondage, and became a greater slave to such of his own kind than the beasts of the field were to him. And hereupon the earth … was hedged into enclosures by the teachers and rulers, and the others were made … slaves. And that earth that is within this creation made a common storehouse for all, is bought and sold and kept in the hands of a few, whereby the great Creator is mightily dishonoured, as if he were a respecter of persons, delighting in the comfortable livelihood of some and rejoicing in the miserable poverty and straits of others.